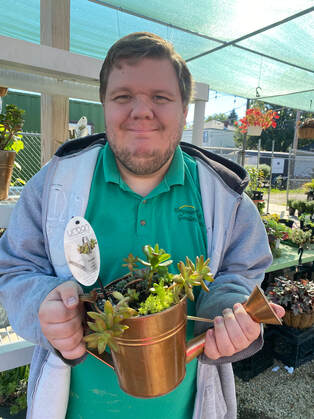 Dylan Wants to be a “Perennial”

Dylan Galivan has found his dream job at Empowering Gardens. “I can’t imagine working anywhere else,” says the 26-year-old. He has already racked up five years at the Forest Park nursery and plant store, but says, “I want to work here much, much, much longer.”
Ana Solares and Richard Biggins established Empowering Gardens in 2015 to enable those with disabilities a chance to work in a thriving business.  Employees are encouraged to tackle new skills, contribute ideas and thrive in their jobs.
“Ana and Richard are awesome bosses,” Dylan explains.  “I like helping people and working as a team with my colleagues and helping our customers. In some jobs, you’re expected to operate like a piece of machinery. I don’t want to be a cog in a wheel.  I belong here.”
Dylan has learned to label products, transplant, weed, water and carry plants to customers’ vehicles.  When the outside work is complete, he also creates greeting cards from dried flowers that are sold in the gift shop along with other garden-themed crafts.

“At first, art projects were a challenge for Dylan,” Richard points out.  “It was new and different. But he overcame his hesitancy and is very creative.
Ana describes Dylan as sensitive, kind and very sociable.  “You should see him give customers a tour of our outdoor/indoor area.  He has a strong, clear voice and does a great job of promoting us.”
Outside of work, Dylan enjoys YouTube videos, gaming and hanging out with his friends.  He loves watching movies and is quite talented at acting out his favorite characters.  Next time you see Dylan, ask to see his Clint Eastwood impersonation. 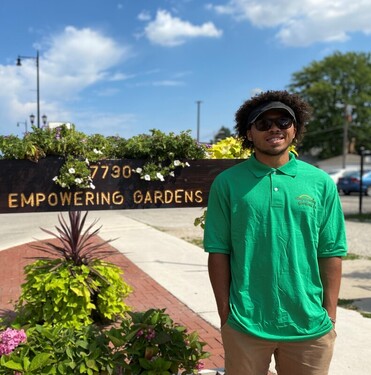 ​When the covid pandemic put an end to Kevin Bonner’s job teaching kids to play chess, he felt lost.
Chess had become his “team sport” after a diagnosis of Muscular Dystrophy at age 4 put an end to
physical sports like soccer and baseball.
Then in April of 2021, he was hired at Empowering Gardens, a Forest Park nursery and plant store where
his talents with people and plants reached new heights. In fact, after little more than a year, he felt
confident enough to snag a cashier job at the fast-paced Whole Foods in River Forest. “It’s super
exciting,” Kevin says. “The nursery job opened up my eyes to possibilities and goals I can set for
myself.”
Kevin credits his success to Ana Solares and Richard Biggins. The two established Empowering Gardens
in 2015 to give those with disabilities a chance to work in a thriving business where they are encouraged
to tackle new skills, contribute ideas and prosper like the plants they nurture.
“Ana and Richard are my idols,” says the 23-year-old. “They taught me discipline and encouraged me to
focus on my goals while surrounding me with kindness. I gained a sense of purpose that motivated me to
push forward and grow as a person. I will be eternally grateful for their mission and the way they treat
people. I feel it is now a part of who I am and try to spread that vibe to others everywhere I go.”
Kevin admits he was once anxious about talking to people, but the positive energy of the nursery’s
customers helped him open up. He also became comfortable handling money, learning skills he is using in
his new job.
“We couldn’t be happier for Kevin in his new position,” says Richard. “It’s been exciting for us to see him
overcome obstacles and flourish as a person.”
Kevin continues as a volunteer at Empowering Gardens. He has developed a fondness for plants, filling
his room at home with his favorites and naming each one.
“We are very happy Kevin will still be around,” says Ana. “He is very kind, very likeable, gets along with
all employees and customers really like him.” 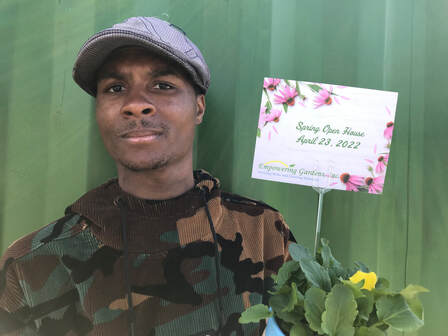 One of Jerry’s first tasks each day as a Cashier at Empowering Gardens is to select the music for the day. Among his favorite bands/artists are: Red Hot Chili
Peppers, Queen, The Beatles, The Doors, ACDC, and Tom Petty. As a musician who enjoys playing the piano and guitars (electric and acoustic), Jerry dreams of becoming a band manager and traveling worldwide.
Jerry started working at Empowering Gardens in the spring of 2018, and shows up to work rain or shine, with a good attitude. Besides cashiering,he enjoys watering plants, unloading trucks, making compost and pricing plants. A free-spirited young man, Jerry enjoys swimming, discovering new places with his family and eating Chicago-style food like hot dogs, pizza, and Italian beef. Jerry hopes that Empowering Gardens receives more donations so we can build a greenhouse and a gift shop; he would love to work in a temperature-controlled environment. Promoting a friendly environment is a part of our mission at Empowering Gardens so please, next time Jerry assists you with your purchase, feel free to share your music interest with him. 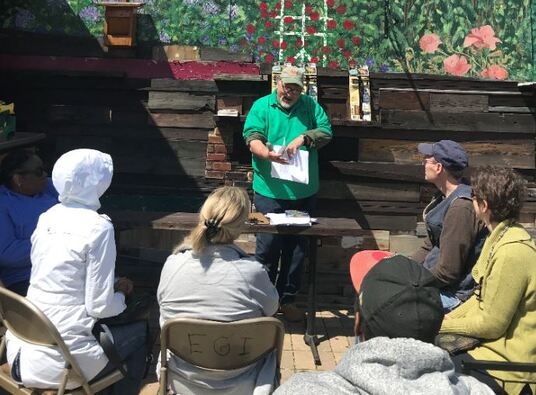 Employee Grows Independently at Empowering Gardens ​
​
​Adam Barron embodies Empowering Gardens’ (EGI) mission of providing growth opportunities for its employees while beautifying our community, one plant at a time.

Adam grew up in Oak Park, attended Whittier Elementary, and graduated from OPRF in 1980. In 1982 he received his associates degree in science and ornamental horticulture through Triton college. After that, he was hired as a greenhouse attendant at the Oak Park Conservatory, he also worked in Florida at Builder’s Square greenhouses and Field of Flowers. At his first interview for EGI, he recognized future employer Ana as someone he wanted to learn from and work with. Adam was the very first employee of EGI and has grown along with it.

Through his hard work and diligence, Adam has been able to save enough money to move out of the YMCA and live independently. He likes to cook for himself, including chili, spaghetti, and stews. Independent living, he calls “the most important thing in my life.” He has ventured even further: taking his very first vacation. Adam chose to visit Washington DC for his first trip and hopes to travel more in the future, to Canada, Israel, and other parts of the US.

Adam has taught a variety of classes to share his knowledge of vegetables, composting, container gardening, deer resistant plants, natives, annuals, and pollinators. Adam’s favorite annuals to recommend are marigolds, impatiens and geraniums. His favorite perennials are the varied grasses, and coneflowers.

This winter, Adam has been nurturing all of the plants in the indoor space, resulting in a variety of houseplants being available for sale year-round. Adam’s care and attention have allowed EGI to expand the range of plants available for sale. To further his education, Adam has continued his formal studies at Triton, focusing on propagation, insects and soil. One of his goals is to gain a certificate in greenhouse management and put it to use when the land finally belongs to EGI.

Dedicated Employee “Sells” Empowering Gardens while in the ER 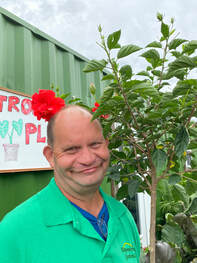 Michael Arscott is such a dedicated employee that, even while being treated in the ER for an allergic reaction to a bee sting, he was drumming up business for his employer, Empowering Gardens.

Ana Solares and Richard Biggins established the Forest Park nursery and plant store in 2015 to give those with disabilities a chance to succeed in a thriving business. The two owners encourage workers to tackle new skills, contribute ideas and develop relationships.

Michael, age 56, can be found helping Empowering Gardens customers carry their new-bought plants to their cars.  “I love the people in this neighborhood, they are very nice to me,” he says.  “It makes me feel good to help them.”  Michael also helps with fundraisers and distributes promotional flyers in the community.

Ana Solares describes Michael as an employee who makes things happen.  “He’s very social, independent and sweet.  He takes ownership of what needs to be done.  This is not just a job to him.  He feels personally responsible for helping the business succeed.  Recruiting customers while in the ER is typical of him.”  But Michael is not all work--he has a healthy sense of humor and often teases other employees.

Originally from the Joliet area, he now resides in Stickney, taking a bus to Forest Park.  When not working, Michael enjoys visiting his brother in Montana, going to museums and the library to play slots on the computer.  Chocolate ice cream with hot fudge sauce is a favorite treat of his at the nearby Brown Cow.

By the way, Michael’s recruiting worked.  The ER staff came to shop at Empowering Gardens after meeting Michael. 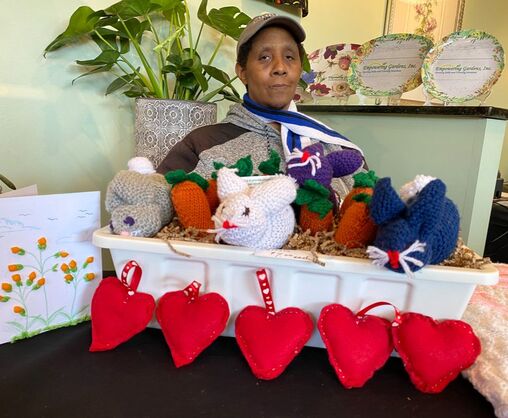 Darrin poses with some of the products he has created:  knitted bunnies and carrots, painted greeting cards, lavender heart sachets and plants he has propagated.

Initiative, commitment and reliability are traits any employer would value in an employee, attributes that Darrin Dillard, age 54, has demonstrated since joining the staff of Empowering Gardens four years ago.  That’s why Ana Solares and Richard Biggins established the Forest Park nursery and plant store in 2015--to give those with disabilities a chance to work in a thriving business where they are encouraged to tackle new skills, contribute ideas and bloom like the plants they nurture.

When Darrin was first hired, his skills included some knowledge of plants, knitting, drawing and painting. As an Empowering Gardens team member, Darrin has learned customer service skills and excels at creating the greeting cards sold in the store.  An avid knitter from a young age, Darrin turned to YouTube to teach himself to knit garden-themed products, like bunnies and carrots, adding to the store’s inventory. He surprised the owners when he took the initiative to propagate cuttings and nurse them into full plants.  “He is engaged in the business, which helps himself and us,” says Ana.  “He is also very dedicated, taking two buses and the Green Line to commute from his Chicago home.”

Darrin loves his job at Empowering Gardens. “Everyone here is very nice,” he says. “I like to meet customers and help carry their purchases to their cars so they can make their homes beautiful. I like to learn about new varieties of plants and to make the crafts. And I earn money.”

Rose Krogh, an avid gardener and frequent customer, has watched Darrin grow in confidence at Empowering Gardens.  “I believe its mission of cultivating its employees as well as its business serves our community in ways that are priceless,” she says.